It is believed that on the hillfort, near the historic road leading from Salduve to Sidrabi and further to Mežotne, once Kuļu Castle, which was burnt down by the Livonian Order in 1348, was located. Archaeological surveys at the hillfort have revealed items dating back to the 5th–14th centuries. Since ancient times, there has been a spring at the foot of the hillfort, and its water was considered of particularly value. Probably the habit of making promises is directly related to the spring. The promise could be, for example, visiting a sacred place or setting up a cross. Act of making a promise incorporates elements of the Baltic pagan religion and Christianity, creating a custom that is unique to Samogitia and the part of Lithuania’s Semigallia. On April 5, 1961, crosses from Jurgaičių Hillfort were knocked down, and, from that time on until the end of 1980s, the custom of setting up the crosses was a form of resistance to the Soviet occupation. The estimate number of small and big crosses on the hill exceeds 100,000. 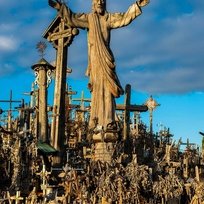 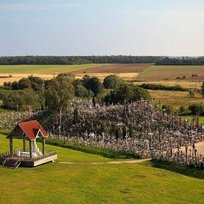