Ąžuolpamūšė Hillfort (Ąžuolpamūšės piliakalnis) is among the most intensely explored Semigallian hillforts in Lithuania. The hillfort at the merging point of the rivers Tatula and Uge was fortified with defensive ramparts and two ditches. Archaeological excavation surveys revealed remains of buildings dating back to the 9th–13th centuries. Until the 19th century, the hillfort was enclosed by legends and tales of battles, treasures, devils and ghosts. It also played an important role in the history of the 20th century: in 1933, it was the main location of Pasvalys Riflemen Unit, in 1940, it was occupied by Dagiline Riflemen, and later, Lithuanian partisans set up two bunkers on the slopes of the hillfort. On August 23, 1989, the Baltic Way led along the hillfort, but nowadays it is used to celebrate independence-related events of Lithuania. 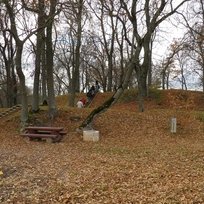