The stelmuže oak (Stelmužės ąžuolas), which grows in the territory of the historical Stelmuže Manor, is the thickest tree and thus is considered the oldest tree in Lithuania. In the 17th century, a church was built next to the oak, suggesting that the place was considered sacred. Until the 20th century, there were different beliefs about the oak, for example, three, seven or nine acorns in your pocket or purse will protect you against misfortunes, illnesses and evil. 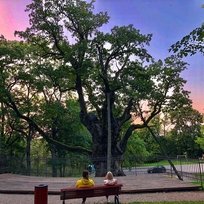