Until the beginning of the 13th century, Sēlpils Hillfort with its wooden castle was the Selonian political and economic centre and the seat of ancient Selonian kings. It included several villages. Nowadays, the hillfort is located on an island on the River Daugava with a picturesque landscape all around and a facilitated resting place for visitors. The active life in Sēlpils took place from the 10th to the 12th century, when the entire hillfort plateau was inhabited. Archaeological excavations have resulted in finding the oldest evidence of human presence in Latvia: German stone castle and Selonian wood castle layers were mixed with flint slices, scrapers and arrowheads, which by their shape are attributable to the end of the Paleolithic or the oldest Stone Age (dating back to about 9th century BC). Nowadays, the island of Sēlpils is up to 2 m above water surface (depending on the water level) and can reach 150 m in length. Castle ruins are under water. The island can be accessed by boat or viewed from the shore of the River Daugava. 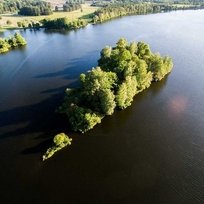 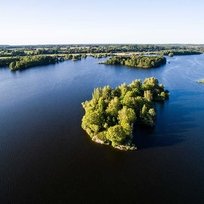