Šatrija Hillfort (Šatrijos piliakalnis) was among the most popular administrative, defensive, economic and religious centres of Samogitia in the early Middle Age. The hillfort rises 228 m above the sea level and its plateau is surrounded by a 2 m high rampart. Archaeological excavations studying the settlement at the foot of the hillfort found evidence of its inhabitation since the 2nd century AD. Perhaps, in the New Age, witches were burned on Šatrija Hillock. Since ancient times, annual festivities are celebrated on the hillfort following the ancient traditions. Every year in the third week of July, an eternal fire is lit on the hillock. 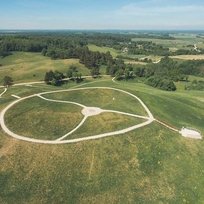