Birute’s Hill is a significant Couronian trading site of the 9th–11th centuries on the Baltic Sea coast, one of the most famous Lithuanian Grand Duchy’s sacred sites and the grave site of Queen Birute (mother of Vytautas the Great). At the foot of the hill – Couronian hillfort and sacred place – a settlement was once present, where archaeologists discovered the remains of buildings, and iron, bronze and ceramic articles. Thanks to the Lithuanian chronicles, the legend about Birute and Kestutis is still known. Researchers have not come to a reliable answer of who Birute actually was – a goddess, a priestess, a queen, a saint, or perhaps a little of each. The legend echoed in two or even three generations of 20th century Lithuanians. 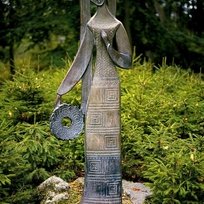